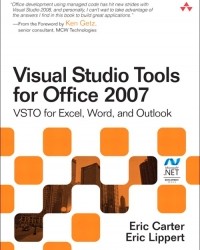 Visual Studio Tools for Office 2007: VSTO for Excel, Word, and Outlook is the definitive book on VSTO 2008 programming, written by the inventors of the technology. VSTO is a set of tools that allows professional developers to use the full power of Microsoft Visual Studio 2008 and the .NET Framework to program against Microsoft Office 2007.

This book delivers in one place all the information you need to succeed using VSTO to program against Word 2007, Excel 2007, and Outlook 2007, and provides the necessary background to customize Visio 2007, Publisher 2007, and PowerPoint 2007. It introduces the Office 2007 object models, covers the most commonly used objects in those object models, and will help you avoid the pitfalls caused by the COM origins of the Office object models.