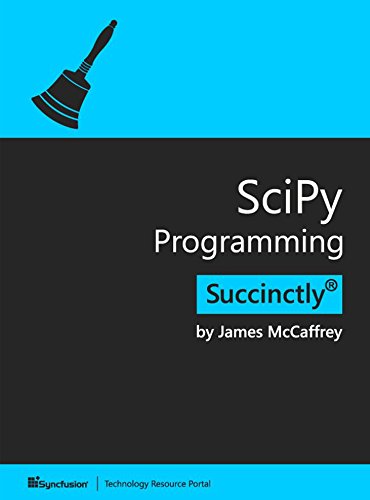 James McCaffrey’s SciPy Programming Succinctly offers readers a quick, thorough grounding in knowledge of the Python open source extension SciPy. The SciPy library, accompanied by its interdependent NumPy, offers Python programmers advanced functions that work with arrays and matrices. Each section presents a complete demo program for programmers to experiment with, carefully chosen examples to best illustrate each function, and resources for further learning.
The SciPy library (Scientific Python, pronounced "sigh-pie") is an open source extension to the Python language. When Python was first released in 1991, the language omitted an array data structure by design. It quickly became apparent that an array type and functions that operate on arrays would be needed for numeric and scientific computing.
The SciPy stack has three components: Python, NumPy, and SciPy. The Python language has basic features, such as loop control statements and a general purpose list data structure. The NumPy library (Numerical Python) has array and matrix data structures plus some relatively simple functions such as array search. The SciPy library, which requires NumPy, has many intermediate and advanced functions that work with arrays and matrices. There is some overlap between SciPy and NumPy, meaning there are some functions that are in both libraries.