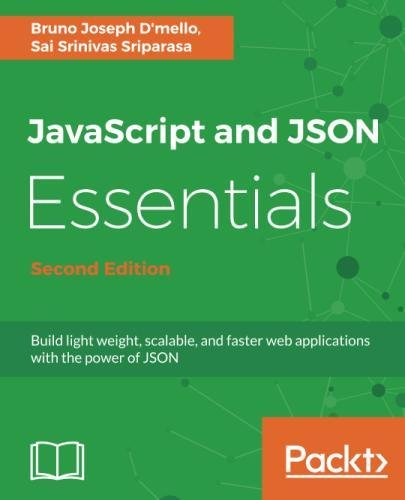 Use JSON for building web applications with technologies like HTML, JavaScript, Angular, Node.js, Hapi.js, Kafka, socket.io, MongoDB, Gulp.js, and handlebar.js, and others formats like GEOJSON, JSON-LD, MessagePack, and BSON.

JSON is an established and standard format used to exchange data. This book shows how JSON plays different roles in full web development through examples. By the end of this book, you'll have a new perspective on providing solutions for your applications and handling their complexities.

After establishing a strong basic foundation with JSON, you'll learn to build frontend apps by creating a carousel. Next, you'll learn to implement JSON with Angular 5, Node.js, template embedding, and composer.json in PHP. This book will also help you implement Hapi.js (known for its JSON-configurable architecture) for server-side scripting.

You'll learn to implement JSON for real-time apps using Kafka, as well as how to implement JSON for a task runner, and for MongoDB BSON storage. The book ends with some case studies on JSON formats to help you sharpen your creativity by exploring futuristic JSON implementations. By the end of the book, you'll be up and running with all the essential features of JSON and JavaScript and able to build fast, scalable, and efficient web applications.

If you're a web developer with a basic understanding of JavaScript and want to write JSON data, integrate it with RESTful APIs to create faster and scalable applications, this book is for you.