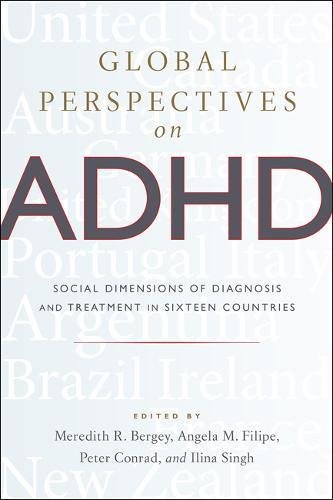 Attention deficit-hyperactivity disorder (ADHD) has been a common psychiatric diagnosis in both children and adults since the 1980s and 1990s in the United States. But the diagnosis was much less common?even unknown?in other parts of the world. By the end of the twentieth century, this was no longer the case, and ADHD diagnosis and treatment became an increasingly widespread global phenomenon. As the diagnosis was adopted around the world, the definition and treatment of ADHD often changed in the context of different psychiatric professions, medical systems, and cultures.

Global Perspectives on ADHD is the first book to examine how this expanding public health concern is diagnosed and treated in 16 different countries. In some countries, readers learn, over 10% of school-aged children and adolescents are diagnosed with ADHD; in others, that figure is less than 1%. Some countries focus on medicating children with ADHD; others emphasize parent intervention or child therapy. Showing how a medical diagnosis varies across contexts and time periods, this book explains how those distinctions shape medical interventions and guidelines, filling a much-needed gap by examining ADHD on an international scale.