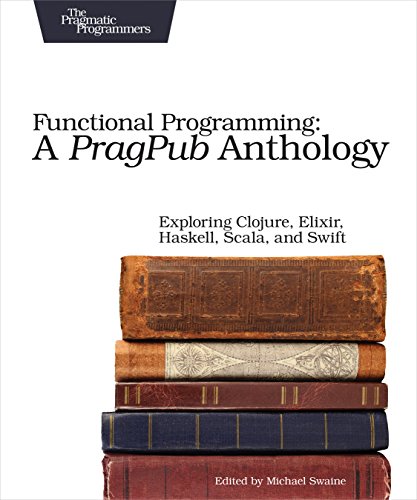 Functional programming is on the rise because it lets you write simpler, cleaner code, and its emphasis on immutability makes it ideal for maximizing the benefits of multiple cores and distributed solutions. So far nobody's invented the perfect functional language - each has its unique strengths. In Functional Programming: A PragPub Anthology, you'll investigate the philosophies, tools, and idioms of five different functional programming languages.

See how Swift, the development language for iOS, encourages you to build highly scalable apps using functional techniques like map and reduce. Discover how Scala allows you to transition gently but deeply into functional programming without losing the benefits of the JVM, while with Lisp-based Clojure, you can plunge fully into the functional style. Learn about advanced functional concepts in Haskell, a pure functional language making powerful use of the type system with type inference and type classes. And see how functional programming is becoming more elegant and friendly with Elixir, a new functional language built on the powerful Erlang base.The industry has been embracing functional programming more and more, driven by the need for concurrency and parallelism. This collection of articles will lead you to mastering the functional approach to problem solving. So put on your explorer's hat and prepare to be surprised. The goal of exploration is always discovery.

Familiarity with one or more programming languages.