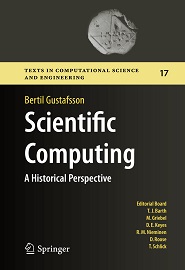 This book explores the most significant computational methods and the history of their development. It begins with the earliest mathematical / numerical achievements made by the Babylonians and the Greeks, followed by the period beginning in the 16th century. For several centuries the main scientific challenge concerned the mechanics of planetary dynamics, and the book describes the basic numerical methods of that time.

In turn, at the end of the Second World War scientific computing took a giant step forward with the advent of electronic computers, which greatly accelerated the development of numerical methods. As a result, scientific computing became established as a third scientific method in addition to the two traditional branches: theory and experimentation.

The book traces numerical methods’ journey back to their origins and to the people who invented them, while also briefly examining the development of electronic computers over the years. Featuring 163 references and more than 100 figures, many of them portraits or photos of key historical figures, the book provides a unique historical perspective on the general field of scientific computing – making it a valuable resource for all students and professionals interested in the history of numerical analysis and computing, and for a broader readership alike.