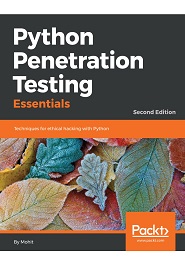 This book gives you the skills you need to use Python for penetration testing, with the help of detailed code examples. This book has been updated for Python 3.6.3 and Kali Linux 2018.1.

This book gives you the skills you need to use Python for penetration testing (pentesting), with the help of detailed code examples.

We start by exploring the basics of networking with Python and then proceed to network hacking. Then, you will delve into exploring Python libraries to perform various types of pentesting and ethical hacking techniques. Next, we delve into hacking the application layer, where we start by gathering information from a website. We then move on to concepts related to website hacking?such as parameter tampering, DDoS, XSS, and SQL injection.

By reading this book, you will learn different techniques and methodologies that will familiarize you with Python pentesting techniques, how to protect yourself, and how to create automated programs to find the admin console, SQL injection, and XSS attacks.

If you are a Python programmer, a security researcher, or an ethical hacker and are interested in penetration testing with the help of Python, then this book is for you. Even if you are new to the field of ethical hacking, this book can help you find the vulnerabilities in your system so that you are ready to tackle any kind of attack or intrusion.