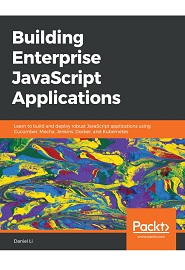 Become a senior developer by building enterprise applications that use modern techniques such as TDD, containerization, continuous integration, and deployment
With the over-abundance of tools in the JavaScript ecosystem, it’s easy to feel lost. Build tools, package managers, loaders, bundlers, linters, compilers, transpilers, typecheckers – how do you make sense of it all?
In this book, we will build a simple API and React application from scratch. We begin by setting up our development environment using Git, yarn, Babel, and ESLint. Then, we will use Express, Elasticsearch and JSON Web Tokens (JWTs) to build a stateless API service. For the front-end, we will use React, Redux, and Webpack.
A central theme in the book is maintaining code quality. As such, we will enforce a Test-Driven Development (TDD) process using Selenium, Cucumber, Mocha, Sinon, and Istanbul. As we progress through the book, the focus will shift towards automation and infrastructure. You will learn to work with Continuous Integration (CI) servers like Jenkins, deploying services inside Docker containers, and run them on Kubernetes.
By following this book, you would gain the skills needed to build robust, production-ready applications.
What you will learn