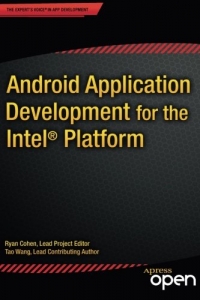 The increase in Android devices featuring Intel processors has created a demand for Android applications optimized for Intel Architecture: Android Application Development for the Intel Platform is the perfect introduction for software engineers and mobile app developers. Through well-designed app samples, code samples and case studies, the book teaches Android application development based on the Intel platform – including for smartphones, tablets, and embedded devicesâ??covering performance tuning, debugging and optimization.