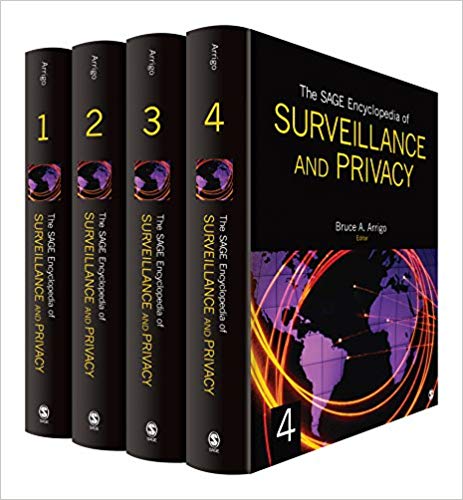 The SAGE Encyclopedia of Surveillance, Security, and Privacy Pdf

Although surveillance hit the headlines with revelations by Edward Snowden that the National Security Agency had been tracking phone calls worldwide, surveillance of citizens by their governments actually has been conducted for centuries. Only now, with the advent of modern technologies, it has exponentially evolved so that today you can barely step out your door without being watched or recorded in some way. In addition to the political and security surveillance unveiled by the Snowden revelations, think about corporate surveillance: each swipe of your ID card to enter your office is recorded, not to mention your Internet activity. Or economic surveillance: what you buy online or with a credit card is recorded and your trip to the supermarket is videotaped. Drive through a tollbooth, and your license plate is recorded. Simply walk down a street and your image is recorded again and again and again. Where does this begin and end?

In all levels of social structure, from the personal to the political to the economic to the judicial, The SAGE Encyclopedia of Surveillance, Security, and Privacy uncovers and explains how surveillance has come to be an integral part of how our contemporary society operates worldwide and how it impacts our security and privacy

About the Author
Bruce A. Arrigo, PhD, holds a joint appointment at the University of North Carolina at Charlotte (UNCC). He is Professor of Criminology, Law, and Society within the Department of Criminal Justice and Criminology and Professor of Public Policy within the College of Liberal Arts and Science’s interdisciplinary doctoral Program in Public Policy. Professor Arrigo holds an additional faculty appointment in the Department of Psychology, and in the College of Health and Human Services, he holds an appointment in the Department of Public Health Sciences. He is a faculty associate in the Center for Professional and Applied Ethics?a teaching, research, and service unit of UNCC’s Philosophy Department, a senior member of the University’s Honors College, and a faculty affiliate of Wake Forest University’s Bioethics, Health, and Society Program.

Professor Arrigo began his professional career as an outreach worker, community organizer, and social activist. His mobilization efforts extended to a number of economically disadvantaged and political disenfranchised constituency groups, including (1) the homeless and marginally housed; (2) users of (mental) health services; (3) adult and juvenile ex-offenders; (4) survivors of sexual assault; and (5) abusers of licit/illicit drugs. Professor Arrigo’s work with these constituencies culminated when he directed and implemented the social designing housing strategy for the city of Pittsburgh’s largest single room occupancy (SRO) facility, Wood St. Commons. His civic engagement in this area also included developing and managing the facility’s human welfare and social policy agenda. During his directorship (1987–1990), this agenda addressed the health, human service, and advocacy needs of the city’s underserved and nonserved citizens.

Professor Arrigo was awarded the PhD from the Pennsylvania State University in the administration of justice. He specialized in the study of law, politics and mental health policy. He has additional graduate training in law (Temple University), as well as advanced degrees in psychology (Duquesne University) and in sociology (Duquesne University). He served as founding director of the Institute of Psychology, Law, and Public Policy at the California School of Professional Psychology-Fresno (1996–2001), and as chair of the Department of Criminal Justice at the University of North Carolina at Charlotte (2001–2004).

Professor Arrigo’s research and scholarship is interdisciplinary in its scope, and it is pertinent to a wide range of public interest controversies at the intersection of human justice and social welfare. More specifically, he relies upon normative, doctrinal, and/or qualitative methods of inquiry to investigate enduring problems or emerging issues in (1) law, health, and politics; (2) theory, culture, and society; and (3) disorder, crime, and punishment. His exploration of these problems and issues extends from the interpersonal to the global and from the transpersonal to the transnational, resulting in more than 200 peer-reviewed journal articles, law reviews, chapters in books, and academic essays. He is also the (co)author or (co)editor of 25 titles, published or in press. Recent monographs include Revolution in Penology: Rethinking The Society of Captives (Rowman & Littlefield, 2009), and The Ethics of Total Confinement: A Critique of Madness, Citizenship, and Social Justice (Oxford University Press, 2011). Recent textbooks and/or reference works include Introduction to Forensic Psychology 3rd ed. (Elsevier, 2012), and The Encyclopedia of Criminal Justice Ethics, Vol., 1-2 (Sage, 2014). Recent Journal Special Issues include Critical Criminology as Academic Activism: On Praxis and Pedagogy, Resistance and Revolution, Critical Criminology: An International Journal (Springer, 2016), and (with L. Davidson), What’s “Good” About Public Sector Mental Health?: Social Justice Policy Responses and Reforms, Behavioral Sciences and The Law (John Wiley & sons, 2017).

Professor Arrigo was the editor-in-chief of the peer-reviewed sociological quarterly Humanity & Society (1996–2000); is founding and current editor-in-chief of the peer-reviewed behavioral science publication Journal of Forensic Psychology Research and Practice (2000–present); and serves on the editorial or advisory boards of several (inter)national periodicals relevant to the disciplines of sociology/criminology, law/legal studies, psychiatry/psychology, and social/public policy. Professor Arrigo was the founding book series editor for Criminal Justice and Psychology (Carolina Academic Press) and for Critical Perspectives in Criminology (University of Illinois Press). He is also the lead coauthor of The New Penology: Outline for a Theory of Mind, Subjectivity, and Power (in preparation)