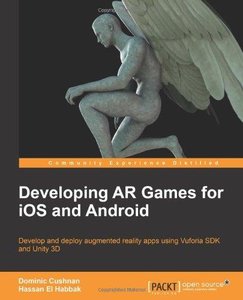 While augmented reality has been around for years, it has never reached its full potential. Now, the vast majority of people are walking around with powerful smartphones that are perfectly suited to house the AR experience. This is the reason why the technology has become as popular as it is now. Augmented reality can deliver a level of immersion that is unrivalled by any other method of development, as it blends our reality with overlaid computer generated data.

Developing AR Games for iOS and Android is a well-structured guide that introduces you to the augmented reality world using a step-by-step approach. It will help you understand how to create powerful AR apps using Unity as well as how to create immersive experiences for users.

Developing AR Games for iOS and Android examines the structures of Vuforia and Unity and how they work together to create augmented reality. The book will introduce you to the structure of the Unity environment and how Vuforia facilitates creating AR apps.You will also see how easy it is to build a whole world in Unity’s Editor. You will go through the process of using Vuforia prefabs like the AR camera and Image Target in Unity, where you can build the AR experience in a what-you-see-is-what-you-get fashion.

In Developing AR Games for iOS and Android, you will learn both basic and advanced techniques that can be applied to achieve truly immersive AR apps and then how to deploy them on iOS and Android devices.