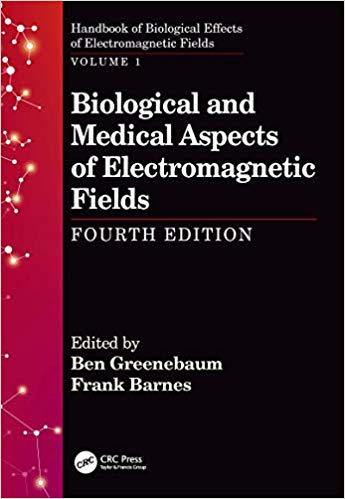 The two volumes of this new edition of the Handbook cover the basic biological, medical, physical, and electrical engineering principles. They also include experimental results concerning how electric and magnetic fields affect biological systems—both as potential hazards to health and potential tools for medical treatment and scientific research. They also include material on the relationship between the science and the regulatory processes concerning human exposure to the fields. Like its predecessors, this edition is intended to be useful as a reference book but also for introducing the reader to bioelectromagnetics or some of its aspects.

• Expanded coverage of electromagnetic brain stimulation, characterization and modeling of epithelial wounds, and recent lab experiments on at all frequencies

• Section on background for setting standards and precautionary principle

• Discussion of recent epidemiological, laboratory, and theoretical results; including: WHO IARC syntheses of epidemiological results on both high and low frequency fields, IITRI lab study of cancer in mice exposed to cell phone-like radiation, and other RF studies

• All chapters updated by internationally acknowledged experts in the field

About the Author
Editors Frank Barnes received his B.S. in electrical engineering in 1954 from Princeton University and his M.S., engineering, and Ph.D. degrees from Stanford University in 1955, 1956, and 1958, respectively. He was a Fulbright scholar in Baghdad, Iraq, in 1958 and joined the University of Colorado in 1959, where he is currently a distinguished professor. He has served as chairman of the Department of Electrical Engineering, acting dean of the College of Engineering and in 1971 as cofounder/director with Professor George Codding of the Political Science Department of the Interdisciplinary Telecommunications Program (ITP). He has served as chair of the IEEE Electron Device Society, president of the Electrical Engineering Department Heads Association, vice president of IEEE for Publications, editor of the IEEE Student Journal and the IEEE Transactions on Education, as well as president of the Bioelectromagnetics Society and U.S. Chair of Commission K?International Union of Radio Science (URSI). He is a fellow of the AAAS, IEEE, International Engineering Consortium, and a member of the National Academy of Engineering. Dr. Barnes has been awarded the Curtis McGraw Research Award from ASEE, the Leon Montgomery Award from the International Communications Association, the 2003 IEEE Education Society Achievement Award, Distinguished Lecturer for IEEE Electron Device Society, the 2002 ECE Distinguished Educator Award from ASEE, The Colorado Institute of Technology Catalyst Award 2004, and the Bernard M. Gordon Prize from National Academy of Engineering for Innovations in Engineering Education 2004. He was born in Pasadena, CA, in 1932 and attended numerous elementary schools throughout the country. He and his wife, Gay, have two children and two grandchildren.

Ben Greenebaum retired as professor of physics at the University of Wisconsin– Parkside, Kenosha, WI, in May 2001, but was appointed as emeritus professor and adjunct professor to continue research, journal editing, and university outreach projects. He received his Ph.D. in physics from Harvard University in 1965. He joined the faculty of UW–Parkside as assistant professor in 1970 following postdoctoral positions at Harvard and Princeton Universities. He was promoted to associate professor in 1972 and to professor in 1980. Greenebaum is author or coauthor of more than 50 scientific papers. Since 1992, he has been editor in chief of Bioelectromagnetics, an international peer reviewed scientific journal and the most cited specialized journal in this field. He spent 1997–1998 as consultant in the World Health Organization’s International EMF Project in Geneva, Switzerland. Between 1971 and 2000, he was part of an interdisciplinary research team investigating the biological effects of electromagnetic fields on biological cell cultures. From his graduate student days through 1975, his research studied the spins and moments of radioactive nuclei. In 1977 he became a special assistant to the chancellor and in 1978, associate dean of faculty (equivalent to the present associate vice chancellor position). He served 2 years as acting vice chancellor (1984–1985 and 1986–1987). In 1989, he was appointed as dean of the School of Science and Technology, serving until the school was abolished in 1996, after which he chaired the physics department through 2001. On the personal side, he was born in Chicago and has lived in Racine, WI, since 1970. Married since 1965, he and his wife have three adult sons and two grandchildren.