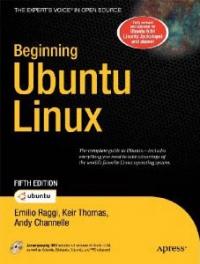 Ubuntu Linux is the fastest growing Linux – based operating system, and Beginning Ubuntu Linux, Fifth Edition teaches all of us – including those who have never used Linux – how to use it productively, whether you come from Windows or the Mac or the world of open source.

Beginning Ubuntu Linux, Fifth Edition shows you how to take advantage of Lucid Lynx. Based on the best-selling previous edition, Emilio Raggi maintains a fine balance between teaching Ubuntu and introducing new features. Whether you aim to use it in the home or in the office, you’ll be introduced to the world of Ubuntu Linux, from simple word processing to using cloud services. You’ll learn how to control the Ubuntu system, which you just installed from the book’s DVD, as you are guided through common tasks such as configuring the system’s graphical user interface (GUI), listening to audio CDs and MP3s, producing documents, using VoIP and chat, and of course, general system maintenance.