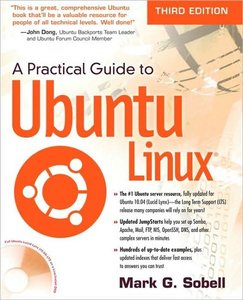 The Most Complete, Easy-to-Follow Guide to Ubuntu Linux

Updated JumpStarts help you set up Samba, Apache, Mail, FTP, NIS, OpenSSH, DNS, and other complex servers in minutes
Hundreds of up-to-date examples, plus comprehensive indexes that deliver instant access to answers you can trust.

Mark Sobell’s A Practical Guide to Ubuntu Linux®, Third Edition, is the most thorough and up-to-date reference to installing, configuring, and working with Ubuntu, and also offers comprehensive coverage of servers—critical for anybody interested in unleashing the full power of Ubuntu.

This edition has been fully updated for Ubuntu 10.04 (Lucid Lynx), a milestone Long Term Support (LTS) release, which Canonical will support on desktops until 2013 and on servers until 2015.

Sobell walks you through every essential feature and technique, from installing Ubuntu to working with GNOME, Samba, exim4, Apache, DNS, NIS, LDAP, g ufw, firestarter, iptables, even Perl scripting. His exceptionally clear explanations demystify everything from networking to security.

You’ll find full chapters on running Ubuntu from the command line and desktop (GUI), administrating systems, setting up networks and Internet servers, and much more. Fully updated JumpStart sections help you get complex servers running—often in as little as five minutes.

Sobell draws on his immense Linux knowledge to explain both the “hows” and the “whys” of Ubuntu. He’s taught hundreds of thousands of readers and never forgets what it’s like to be new to Linux. Whether you’re a user, administrator, or programmer, you’ll find everything you need here—now, and for many years to come.

The world’s most practical Ubuntu Linux book is now even more useful!


How to Do Everything: Ubuntu
Ubuntu Unleashed 2015 Edition