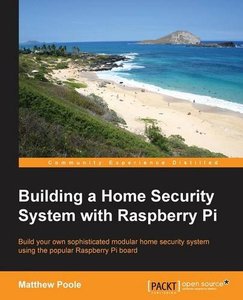 Building a Home Security System with Raspberry Pi starts off by showing you the Raspberry Pi and how to set up the Linux-based operating system. It then guides you through connecting switch sensors and LEDs to the native GPIO connector safely, and how to access them using simple Bash scripts. As you dive further in, you’ll learn how to build an input/output expansion board using the I2C interface and power supply, allowing the connection of the large number of sensors needed for a typical home security setup.

In the later chapters of the book, we’ll look at more sophisticated topics such as adding cameras, remotely accessing the system using your mobile phone, receiving intrusion alerts and images by e-mail, and more.