Getting Started with tmux

Getting Started with tmux 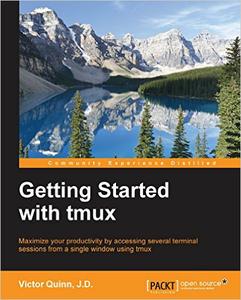 Getting Started with tmux Pdf

We will begin with a simple introduction to tmux and learn some ways in which it can help increase productivity in your daily terminal usage. From there, we’ll move on to configuring and customizing tmux to make it work, look, and feel the way that best suits your needs. Along the way, we have tutorials and screenshots aplenty so that you can follow along and avoid feeling lost. We’ll also explain some of the core concepts of tmux, including the way it uses sessions, windows, and panes in order to divide content and running programs.

We’ll touch on how to perform basic manipulation of text to copy and paste text from one window to another or even from one file to another. We’ll learn how to use tmux for fault-tolerant SSH sessions or pair programming, and we finish by discussing some other open source tools that can be used alongside tmux to help make it even more powerful.

By the end of this book, we will have a much better understanding of tmux and its capabilities with the tools necessary to turbocharge our terminal experience.