Nothing Makes You Free: Writings by Descendants of Jewish Holocaust Survivors

Nothing Makes You Free: Writings by Descendants of Jewish Holocaust Survivors 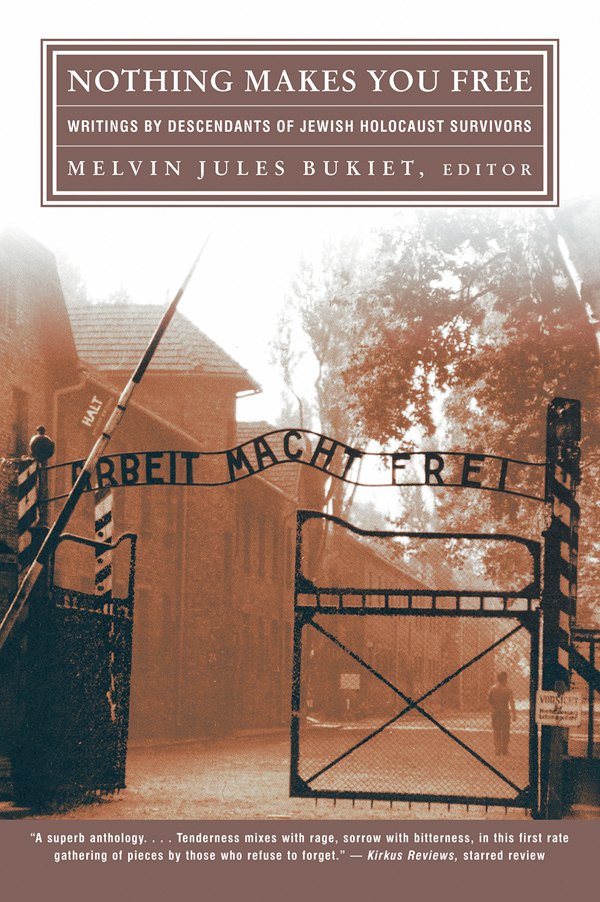 Nothing Makes You Free: Writings by Descendants of Jewish Holocaust Survivors Pdf

History is preserved in the memories of the survivors of the Holocaust and the imaginations of their children, the so-called Second Generation. Nothing Makes You Free considers the heritage of the descendants of those who faced the horrific lie that adorned the gates of many German concentration camps: "Arbeit Macht Frei" ("Work Makes You Free"). In the words of this groundbreaking anthology’s introduction: "Other kids’ parents didn’t have numbers on their arms. Other kids’ parents didn’t talk about massacres as easily as baseball. Other kids’ parents loved them, but never gazed at their offspring as miracles in the flesh....How do you deal with this responsibility? Well, if you were a writer, you wrote." Gathered here are writings of both fiction and nonfiction, ranging from farce to fantasy to brutal realism, from an international selection of writers, including Art Spiegelman, Eva Hoffman, Peter Singer, and Carl Friedman. Contributors: Lea Aini, David Albahari, Tammie Bob, Lilly Brett, Melvin Jules Bukiet, Leon De Winter, Esther Dischereit, Barbara Finkelstein, Alain Finkielkraut, Carl Friedman, Eva Hoffman, Helena Janaczek, Anne Karpf, Alan Kaufman, Ruth Knafo Setton, Mihaly Kornis, Savyon Liebrecht, Alcina Lubitch Domecq, Gila Lustiger, Sonia Pilcer, Doron Rabinovici, Henri Raczymov, Victoria Redel, Thane Rosenbaum, Goran Rosenberg, Peter Singer, Joseph Skibell, Art Spiegelman, J. J. Steinfeld, Val Vinokurov "Nothing Makes You Free is a wide-ranging, exuberant, and altogether powerful collection. A necessary reminder of the lingering effects of the Holocaust and of all the embers?in each generation?saved from the fire."?Aryeh Lev Stollman, author of The Far Euphrates and The Illuminated Soul "What happens to a generation of writers born after but indelibly shaped by the Holocaust? From the bitterly sardonic title of Bukiet’s clear-eyed and refreshingly unsentimental collection to its last words, this volume will cause all to see this past in startlingly new and unexpected ways. This is certainly not their parent’s Holocaust. But in all their immense variety, dexterity, oppressed imaginativeness, pain, and wonder, these writings show how even as a ’vicarious past,’ the Holocaust continues to shape both inner and outer worlds of the survivors’ offspring and now, by extension, our own as well."?James E. Young, author of At Memory’s Edge and The Texture of Memory "A superb anthology...tenderness mixes with rage, sorrow with bitterness, in this first-rate gathering of pieces by those who refuse to forget."?Kirkus Reviews, starred review "A trenchant array...convincingly demonstrate[s] that the Second-Generation experience and the artistic vision growing from it is not merely a diluted version of the survivors’ experience, but a distinct phenomenon and ethos of its own."?Miami Herald "An important book."?Booklist


Nixonland: The Rise of a President and the Fracturing of America
The Mind and the Brain: Neuroplasticity and the Power of Mental Force