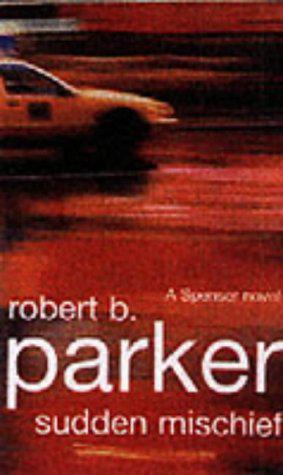 SUMMARY: "Parker’s finest in years . . . one can’t-put-it-down story. Again . . ." proclaimed San Francisco Chronicle of Robert B. Parker’s most recent New York Times bestseller, Small Vices . And The Washington Post Book World agreed, "Small Vices deserves instant inclusion in the Spenser canon." In Sudden Mischief, Parker’s stouthearted hero unwillingly takes a case that tests his sleuthing skills-and his commitment to the woman he loves. Brad Sterling-former Harvard football player, ne’er-do-well, and Susan Silverman’s long out-of-touch ex-husband-is, by all appearances, a successful businessman. But when, in the course of running a vast fundraiser called Galapalooza, he is charged with sexual harassment, he turns to Susan for help. Though Brad denies the charge, he’s desperate, behind in alimony and child-support payments to other exes, and on the verge of dissolution. When Spenser reluctantly agrees to take the case, however, Sterling claims everything is fine-he’s free of debt and free of problems. While the harassment charge begins to look more and more specious, Spenser senses there is something wrong with Galapalooza, as leads to charities turn into dead ends. Susan, meanwhile, becomes steadily more problematic as she wrestles with demons reinvigorated by the resurrection of her ex-husband. As the questions mount, Brad disappears, a body is found, and clues to a shadowy mob connection begin to coalesce. Spenser finds himself fighting a two-front war: against some very bad men, on the one hand, and against an increasingly difficult Susan, on the other. Dark, contemplative, and morally complex, Sudden Mischief is a brilliant meditation on the meaning of justice, love, and passion. Amazon.com Review Sudden Mischief, the 25th Spenser novel, finds Robert B. Parker’s seemingly ageless sleuth once again engaging Boston’s bad guys and sorting out life’s moral dilemmas, all (or mostly) in the name of love. When Spenser’s girlfriend, psychiatrist Susan Silverman, asks him to investigate charges of sexual harassment leveled against her ex-husband, Brad Sterling, the detective agrees, though the assignment "shows every sign of not working out well." As the sexual harassment allegations melt like April snow, Sterling drops out of sight, a dead body appears in his office, and Spenser discovers a murky slush of clues that suggest Sterling’s work as a marketing genius for local charities has been a front for some truly despicable criminal activities. As always, the more-than-slightly-shady Hawk is on hand to help Spenser sort the good from the bad, but Spenser is left to his own devices when it comes to making sense of the emotional havoc the case creates in his relationship with Susan. And what devices they are: emotionally mature and physically dynamic, Spenser once again proves himself as detective, friend, lover, and human being as Sterling’s reappearance forces Susan to examine her past and her conscience while searching for her own autonomy. As always, Spenser endures as an intelligent, ethical, and poetic private eye, even if his endless middle age seems a bit supernatural. Parker’s nimble, Spartan prose suits a character who carries his years in wisdom rather than body fat. If the heart of any truly great detective series is a truly great detective, Sudden Mischief and the rest of Parker’s Spenser novels surely fit the bill. --L.A. Smith From Publishers Weekly The 25th Spenser novel isn’t a romance, but it’s all about love. In early springtime, Susan Silverman, the elegant psychologist and lover who long ago softened the heart of Boston’s preeminent thug-sized PI, asks Spenser to investigate the sexual harassment suit that has been filed against her first husband, Brad Sterling. Susan’s ambivalence about Brad’s predicament doesn’t make the case easy for Spenser; nor does the gradually disclosed involvement of the noted Harvard Law School professor whose young wife is one of the plaintiffs. As Spenser and his sidekick, Hawk, trace Brad’s business dealings (he’s a professional fund-raiser who’s hired to run mammoth charity events), they also come up against a lawyer employed by the local organized crime crowd and some hired muscle associated with same, one of whom is found fatally shot in Brad’s office. The next murder victim, a woman, turns out to be the director of a counseling service for ex-cons, which was also listed as benefiting from the most recent charity bash. What’s more, the dead woman had her own connection to the still-missing Brad. Threatened repeatedly with fists and guns while coping with Susan’s rare emotional uncertainty, Spenser stays the course to a resolution in which he and Susan both prevail. The mystery in this valentine may be insubstantial, but readers who pick up Parker’s bestselling series for its characters and atmosphere will be delighted. BOMC main selection. Copyright 1998 Reed Business Information, Inc.