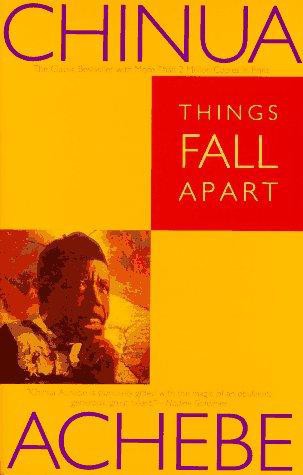 Things Fall Apart tells two intertwining stories, both centering on Okonkwo, a ?strong man? of an Ibo village in Nigeria. The first, a powerful fable of the immemorial conflict between the individual and society, traces Okonkwo?s fall from grace with the tribal world. The second, as modern as the first is ancient, concerns the clash of cultures and the destruction of Okonkwo’s world with the arrival of aggressive European missionaries. These perfectly harmonized twin dramas are informed by an awareness capable of encompassing at once the life of nature, human history, and the mysterious compulsions of the soul. ** Amazon.com Review One of Chinua Achebe’s many achievements in his acclaimed first novel, Things Fall Apart, is his relentlessly unsentimental rendering of Nigerian tribal life before and after the coming of colonialism. First published in 1958, just two years before Nigeria declared independence from Great Britain, the book eschews the obvious temptation of depicting pre-colonial life as a kind of Eden. Instead, Achebe sketches a world in which violence, war, and suffering exist, but are balanced by a strong sense of tradition, ritual, and social coherence. His Ibo protagonist, Okonkwo, is a self-made man. The son of a charming ne’er-do-well, he has worked all his life to overcome his father’s weakness and has arrived, finally, at great prosperity and even greater reputation among his fellows in the village of Umuofia. Okonkwo is a champion wrestler, a prosperous farmer, husband to three wives and father to several children. He is also a man who exhibits flaws well-known in Greek tragedy: Okonkwo ruled his household with a heavy hand. His wives, especially the youngest, lived in perpetual fear of his fiery temper, and so did his little children. Perhaps down in his heart Okonkwo was not a cruel man. But his whole life was dominated by fear, the fear of failure and of weakness. It was deeper and more intimate than the fear of evil and capricious gods and of magic, the fear of the forest, and of the forces of nature, malevolent, red in tooth and claw. Okonkwo’s fear was greater than these. It was not external but lay deep within himself. It was the fear of himself, lest he should be found to resemble his father. And yet Achebe manages to make this cruel man deeply sympathetic. He is fond of his eldest daughter, and also of Ikemefuna, a young boy sent from another village as compensation for the wrongful death of a young woman from Umuofia. He even begins to feel pride in his eldest son, in whom he has too often seen his own father. Unfortunately, a series of tragic events tests the mettle of this strong man, and it is his fear of weakness that ultimately undoes him. Achebe does not introduce the theme of colonialism until the last 50 pages or so. By then, Okonkwo has lost everything and been driven into exile. And yet, within the traditions of his culture, he still has hope of redemption. The arrival of missionaries in Umuofia, however, followed by representatives of the colonial government, completely disrupts Ibo culture, and in the chasm between old ways and new, Okonkwo is lost forever. Deceptively simple in its prose, Things Fall Apart packs a powerful punch as Achebe holds up the ruin of one proud man to stand for the destruction of an entire culture. --Alix Wilber From Library Journal Peter Frances James offers a superb narration of Nigerian novelist Achebe’s deceptively simple 1959 masterpiece. In direct, almost fable-like prose, it depicts the rise and fall of Okonkwo, a Nigerian whose sense of manliness is more akin to that of his warrior ancestors than to that of his fellow clansmen who have converted to Christianity and are appeasing the British administrators who infiltrate their village. The tough, proud, hardworking Okonkwo is at once a quintessential old-order Nigerian and a universal character in whom sons of all races have identified the figure of their father. Achebe creates a many-sided picture of village life and a sympathetic hero. A good recording of this novel has been long overdue, and the unhurried grace and quiet dignity of James’s narration make it essential for every collection.?Peter Josyph, New YorkCopyright 1998 Reed Business Information, Inc.