Visions of Awakening Space and Time: Dogen and the Lotus Sutra

Visions of Awakening Space and Time: Dogen and the Lotus Sutra 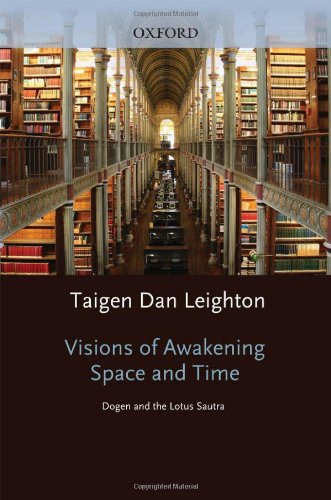 Visions of Awakening Space and Time: Dogen and the Lotus Sutra Pdf

As a religion concerned with universal liberation, Zen grew out of a Buddhist worldview very different from the currently prevalent scientific materialism. Indeed, says Taigen Dan Leighton, Zen cannot be fully understood outside of a worldview that sees reality itself as a vital, dynamic agent of awareness and healing. In this book, Leighton explicates that worldview through the writings of the Zen master Eihei Dogen (1200-1253), considered the founder of the Japanese Soto Zen tradition, which currently enjoys increasing popularity in the West. The Lotus Sutra, arguably the most important Buddhist scripture in East Asia, contains a famous story about bodhisattvas (enlightening beings) who emerge from under the earth to preserve and expound the Lotus teaching in the distant future. The story reveals that the Buddha only appears to pass away, but actually has been practicing, and will continue to do so, over an inconceivably long life span. Leighton traces commentaries on the Lotus Sutra from a range of key East Asian Buddhist thinkers, including Daosheng, Zhiyi, Zhanran, Saigyo, Myoe, Nichiren, Hakuin, and Ryokan. But his main focus is Eihei Dogen, the 13th century Japanese Soto Zen founder who imported Zen from China, and whose profuse, provocative, and poetic writings are important to the modern expansion of Buddhism to the West. Dogen’s use of this sutra expresses the critical role of Mahayana vision and imagination as the context of Zen teaching, and his interpretations of this story furthermore reveal his dynamic worldview of the earth, space, and time themselves as vital agents of spiritual awakening. Leighton argues that Dogen uses the images and metaphors in this story to express his own religious worldview, in which earth, space, and time are lively agents in the bodhisattva project. Broader awareness of Dogen’s worldview and its implications, says Leighton, can illuminate the possibilities for contemporary approaches to primary Mahayana concepts and practices.


Vitterhets-nöjen. Andra delen
Visionary Child: How To Raise a Focused, Visionary Kid That Can Change The World