The Beautiful Things That Heaven Bears

The Beautiful Things That Heaven Bears 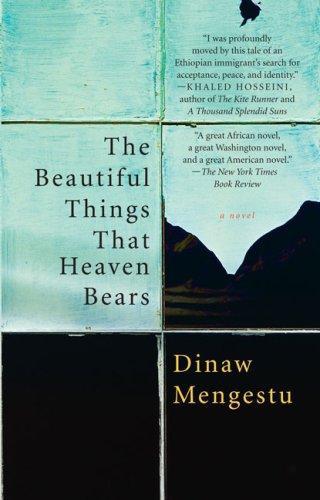 From Publishers Weekly Starred Review. Barely suppressed despair and black wit infuse this beautifully observed debut from Ethiopian émigré Mengestu. Set over eight months in a gentrifying Washington, D.C., neighborhood in the 1970s, it captures an uptick in Ethiopian grocery store owner Sepha Stephanos’s long-deferred hopes, as Judith, a white academic, fixes up the four-story house next to his apartment building, treats him to dinner and lets him steal a kiss. Just as unexpected is Sepha’s friendship with Judith’s biracial 11-year-old daughter, Naomi (one of the book’s most vivid characters), over a copy of The Brothers Karamazov. Mengestu adds chiaroscuro with the story of Stephanos’s 17-year exile from his family and country following his father’s murder by revolutionary soldiers. After long days in the dusty, barely profitable shop, Sepha’s two friends, Joseph from Congo and Kenneth from Kenya, joke with Sepha about African dictators and gently mock his romantic aspirations, while the neighborhood’s loaded racial politics hang over Sepha and Judith’s burgeoning relationship like a sword of Damocles. The novel’s dirge-like tone may put off readers looking for the next Kite Runner, but Mengestu’s assured prose and haunting set pieces (especially a series of letters from Stephanos’s uncle to Jimmy Carter, pleading that he respect "the deep friendship between our two countries") are heart-rending and indelible. (Feb.) Copyright © Reed Business Information, a division of Reed Elsevier Inc. All rights reserved. From Booklist In his run-down store in a gentrifying neighborhood of Washington, D.C., Ethiopian immigrant Stepha Stephanos regularly meets with fellow African immigrants Ken the Kenyan and Joe from the Congo. Their favorite game is matching African nations to coups and dictators, as they consider how their new immigrant expectations measure up to the reality of life in America after 17 years. From his store and nearby apartment, Stephanos makes keen observations of American race and class tensions, seeing similarities--physical and social--to his hometown of Addis Ababa, where his father was killed in the throes of revolution. When Judith, a white woman, and Naomi, her mixed-race daughter, move into the neighborhood, Stephanos finds tentative prospects for friendship beyond his African compatriots. Mengestu, himself an Ethiopian immigrant, engages the reader in a deftly drawn portrait of dreams in the face of harsh realities from the perspective of immigrants. Vanessa Bush Copyright © American Library Association. All rights reserved