36 Arguments for the Existence of God: A Work of Fiction

36 Arguments for the Existence of God: A Work of Fiction 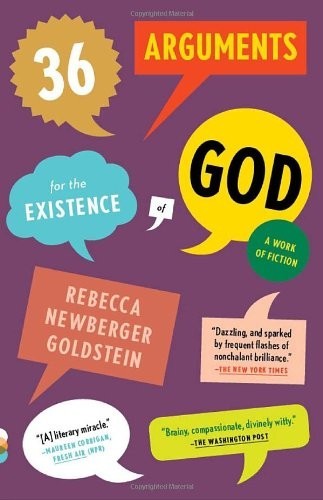 36 Arguments for the Existence of God: A Work of Fiction Pdf

From the author of The Mind-Body Problem: a witty and intoxicating novel of ideas that plunges into the great debate between faith and reason.At the center is Cass Seltzer, a professor of psychology whose book, The Varieties of Religious Illusion, has become a surprise best seller. Dubbed ?the atheist with a soul,? he wins over the stunning Lucinda Mandelbaum??the goddess of game theory.? But he is haunted by reminders of two people who ignited his passion to understand religion: his teacher Jonas Elijah Klapper, a renowned literary scholar with a suspicious obsession with messianism, and an angelic six-year-old mathematical genius, heir to the leadership of an exotic Hasidic sect.Hilarious, heartbreaking, and intellectually captivating, 36 Arguments explores the rapture and torments of religious experience in all its variety. Amazon.com Review Amazon Exclusive: Rebecca Goldstein on * 36 Arguments for the Existence of God* Dinner party hostesses used to be warned to steer the conversation away from politics and religion. I used to wonder why, but I don?t anymore. There are some differences that reveal rifts so deep that dialogue breaks down. Among these are the current debates that have been raging between God-believers and the so-called new atheists. It often seems that people on one side can?t begin to grasp what the world is like, what it feels like, for those on the other side. When the person with whom one is conversing appears utterly opaque, then mistrust and contempt are easily aroused: How can he be saying that when the opposite seems so obvious to me? Is he stupid, dishonest, maybe just a touch evil? These are not the sort of suspicions that the gracious hostess wants intruding at her candle-lit dinner table. But for me, as a novelist, it?s differences like these, indicating entirely different orientations toward the world, which are the most tantalizing to explore. Arguments alone can?t capture all that is at stake for people when they argue about issues of reason and faith. In the end, I place my faith in fiction, in its power to make vividly present how different the world feels to each of us and how these differences are sometimes what is really being expressed in the great debates of our day on the existence of God. The title of the book is 36 Arguments for the Existence of God: A Work of Fiction. I meant the subtitle to be understood as a sort of joke, but as a serious one, too. --Rebecca Goldstein (Photo ? Stephen Pinker) From Publishers Weekly Starred Review. An atheist with a soul is in for a lot of soul-searching in MacArthur genius Goldstein’s rollicking latest ( Mazel). Cass Seltzer, a university professor specializing in the psychology of religion, hits the big time with a bestselling book and an offer to teach at Harvard?quite a step up from his current position at Frankfurter University. While waiting for his girlfriend to return from a conference, Cass receives an unexpected visit from Roz Margolis, whom he dated 20 years earlier and who looks as good now as she ever did. Her secret: dedicating her substantial smarts to unlocking the secrets of immortality. Cass’s recent success and Roz’s sudden appearance send him into contemplation of the tumultuous events of his past, involving his former mentor, his failed first marriage and a young mathematical prodigy whose talent may go unrealized, culminating in a standing-room-only debate with a formidable opponent where Cass must reconcile his new, unfamiliar life with his experience of himself. Irreverent and witty, Goldstein seamlessly weaves philosophy into this lively and colorful chronicle of intellectual and emotional struggles. (Jan.) Copyright ? Reed Business Information, a division of Reed Elsevier Inc. All rights reserved.


42: Douglas Adams’ Amazingly Accurate Answer to Life, the Universe and Everything
The 33 Strategies of War