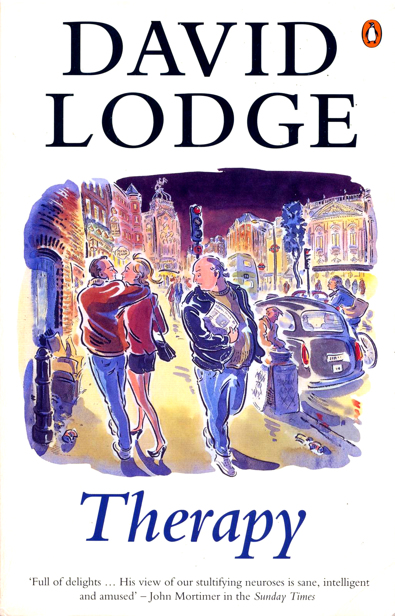 A successful sitcom writer with plenty of money, a stable marriage, a platonic mistress and a flash car, Laurence ‘Tubby’ Passmore has more reason than most to be happy. Yet neither physiotherapy nor aromatherapy, cognitive-behaviour therapy or acupuncture can cure his puzzling knee pain or his equally inexplicable mid-life angst.
As Tubby’s life fragments under the weight of his self-obsession, he embarks — via Kierkegaard, strange beds from Rummidge to Tenerife to Beverly Hills, a fit of literary integrity and memories of his 1950s South London boyhood — on a picaresque quest for his lost contentment ...
‘Lodge remains one of the very best English comic novelists of the post-war era; and Therapy is good for you’ — Time Out
’Energetic, comic ... a highly ingenious games-board of moves and counter-moves’ — Sunday Telegraph
‘David Lodge’s latest novel is a real treat. It’s a Bumper Book or Hit Parade of all his comic devices ... The result is a joy — a sobering joy, but a joy none the less’ — Observer
‘Takes off on wings of humour and pathos which would not have disgraced Lodge’s great hero Dickens ... a splendid novel’
- Daily Express
Cover illustration by Paul Cox
PENGUIN
Fiction
ISBN 0-14-025358-0 U.K. CAN.   £6.99 $13.99   9 0 2 0 9 7801 40 253580