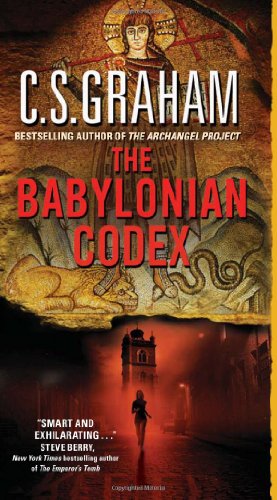 Product Description An ancient Biblical prophecy . . . The convening of the richest and most powerful men on earth . . . The sudden, mysterious death of the vice president . . . When Iraq War vet October "Tobie" Guinness volunteers to remote view a priceless artifact looted from war-ravaged Baghdad, she unwittingly becomes the main target in the midst of a horrific bloodbath. Now a fugitive accused of murder, Tobie turns for help from her sometime partner, rogue CIA agent Jax Alexander. Ranging from a high-mountain Moroccan kasbah and a medieval English church to a frozen Idaho lake, the two must race to unravel the secrets that link a long-lost mosaic to a mysterious Biblical codex, in time to stop a deadly cabal of powerful zealots with a chilling plot to remake the world and bring on the Second Coming. About the Author C.S. Graham is the pseudonym of writing team Steven Harris and Candice Proctor. Steven Harris spent twenty-one years as an Army Intelligence officer. His career ranged from participation in the Army’s controversial domestic spying activities to running agents in Southeast Asia. He also spent ten years in Washington, D.C., working at the national intelligence level. Candice Proctor is the author of more than a dozen previous novels, including the critically acclaimed Sebastian St. Cyr mystery series published under the name C.S. Harris. A former academic with a P.h.D. in history, she has lived most of her life abroad, in Europe, the Middle East, and Australia.