A Marriage Made in Heaven: Or Too Tired for an Affair

A Marriage Made in Heaven: Or Too Tired for an Affair 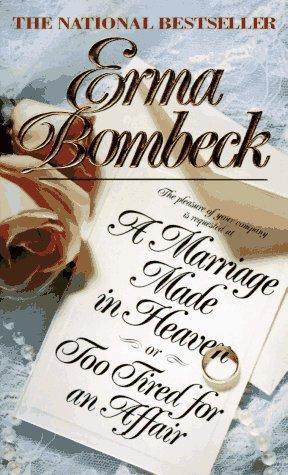 A Marriage Made in Heaven: Or Too Tired for an Affair Pdf

I now pronounce you husband and wife. There are few phrases as sobering, with the possible exceptions of "We have lift-off" and "This country is at war." Yet as they have done for centuries, millions of courageous men and women continue to walk down the aisle every year, without so much as a job description. Now, in her most autobiographical book, Erma Bombeck puts it all in loving and laughing perspective, as she looks back on her own forty-three-year-but-who’s-counting marriage and the timeless passages that make the honorable estate of matrimony the highest-risk, highest-reward profession of all. A Marriage Made in Heaven...or Too Tired for an Affair is Erma’s personal story as well as a resonant evocation of the decades that have shaped modern American matrimony - for better, for worse, and for laughs. Since the sunny day in 1949 when Erma and Bill Bombeck first plighted their troth, their marriage has weathered the advent of televised football and the dark side of Donna Reed. They’ve grappled with teenagers and technology, the women’s movement and the sexual revolution, and have patented their own course in Creative Arguing. They’ve survived both the dream house from hell and the empty nest, and have been there for each other through maternity, miscarriage, and mortality. From the nervous newlywed, to the supermom who elevated guilt to a sacrament, to the steadfast partner, to the shy author on the road, here is an Erma Bombeck readers have never seen before, in a book for all those who are married, who were married, who are thinking about getting married, or who have hesitated (until now!) to take the plunge. From Publishers Weekly Costarring Erma and Bill, the author’s ( Motherhood ) 12th book tops her previous hits as it traces the couple’s lives since they wed in 1949. Told in Bombeck’s comic, no-nonsense style, the story combines suspense, pathos and high humor as the years bring the inevitable moments of "for better and for worse." One of the funniest, and most sobering episodes occurs during the 1960s when the couple’s children turn into hippies and at the same time Betty Friedan announces, in Brombeck’s paraphrase, that "The roles for which our mothers had groomed us--taking care of a husband and family--were wrong." Not long after that, Bombeck (who early in her marriage had responded to her husband’s singsong "Ring-around-the-collar" with a withering "So why don’t you wash your crummy neck") got a job as a "housewife-columnist" at a suburban weekly newspaper earning "three bucks a column." Though she has managed to combine a spectacular career with a successful family life, Bombeck makes clear that having it all means giving one’s all. 500,000 first printing; $350,000 ad/promo . Copyright 1993 Reed Business Information, Inc. From Library Journal This program, read by the author, is classic Bombeck. She begins with recollections about her wedding and continues through the marriage of one of her children. She enlarges on various aspects of marriage with humor, sarcasm, and innuendo. Ranging from struggling beginnings to changes wrought by the arrival (or non arrival) of children, Bombeck meanders through changes in residence, career moves, to the inevitable aging process, all the while successfully evoking the fitful essence of marriage. She describes scenarios common to many couples, which will likely elicit "I know what you mean" from listeners. Bombeck’s narration is a definite plus. She delivers the lines as only one who wrote them can, successfully providing the inflection, emphasis, and speed that best convey her meaning. Recommended for general collections. - Joanna M. Burkhardt, Univ. of Rhode Island Coll. of Continuing Education Lib., ProvidenceCopyright 1994 Reed Business Information, Inc.