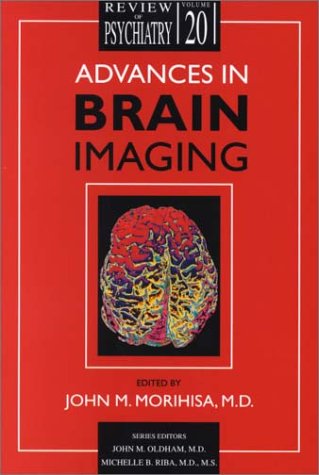 Brain imaging and its application to major psychiatric disorders such as depression, obsessive-compulsive disorder (OCD), and schizophrenia is one of the most exciting fields in psychiatry today.
This thought-provoking collection details the work of five scientists who report some of the most recent findings in the field, review the relevant data in the literature, and place this research within a critical neuroscience context. Each chapter tells a fascinating story: - Chapter 1, Functional Brain Imaging in Psychiatry: The Next Wave, reviews the strengths and limitations of functional magnetic resonance imaging (fMRI), emphasizes the therapeutic implications of brain imaging findings, and suggests that this field may achieve its greatest utility in the search for the genetic bases for psychiatric disorders such as schizophrenia.
- Chapter 2, Cognitive Neuroscience: The New Neuroscience of the Mind and Its Implications for Psychiatry, emphasizes the importance of cognitive deficits in our understanding of psychiatric disorders such as schizophrenia and OCD, presenting an exciting discussion of the development of a theory of altered executive function.
- Chapter 3, Functional Magnetic Resonance Imaging in Children and Adolescents: Implications for Research on Emotion, explains a compelling new way of using fMRI to investigate disorders of emotion (such as major depression, generalized anxiety disorder, separation anxiety disorder, and social phobia) in children, synthesizing neuroscience, psychiatry, and developmental psychology.
- Chapter 4, Brain Structure and Function in Late-Life Depression, presents both structural and functional brain imaging findings, such as decreased brain volume and abnormalities of regional cerebral blood flow, in patients with late-life depression, examining how they compare with younger patients with major depression and raising an intriguing question of trait versus state as the cause for some of these abnormalities.
- Chapter 5, Neuroimaging Studies of Major Depression, details a distinctive longitudinal and intensely multimodal neuroscience approach particularly well suited for brain studies, describing not only the abnormalities, but also the changes in these abnormalities after therapeutic intervention, showing that some appear to depend on the patient's mood and that other neurophysiologic differences persist even after treatment.
The provocative research breakthroughs and findings presented in this volume may lead to important insights in diagnosis, treatment response, and prognosis for some of today's most challenging psychiatric disorders. Researchers and clinicians alike will find that this remarkable volume enhances their understanding of the theory and practice of brain imaging in psychiatry and offers an exciting glimpse of the future directions of both the technology and the science.