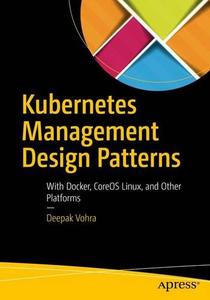 Take container cluster management to the next level; learn how to administer and configure Kubernetes on CoreOS; and apply suitable management design patterns such as Configmaps, Autoscaling, elastic resource usage, and high availability.  Some of the other features discussed are logging, scheduling, rolling updates, volumes, service types, and multiple cloud provider zones. The atomic unit of modular container service in Kubernetes is a Pod, which is a group of containers with a common filesystem and networking. The Kubernetes Pod abstraction enables design patterns for containerized applications similar to object-oriented design patterns. Containers provide some of the same benefits as software objects such as modularity or packaging, abstraction, and reuse.
CoreOS Linux is used in the majority of the chapters and other platforms discussed are CentOS with OpenShift, Debian 8 (jessie) on AWS, and Debian 7 for Google Container Engine.
CoreOS is the main focus becayse Docker is pre-installed on CoreOS out-of-the-box. CoreOS:

Who This Book Is For
Linux admins, CoreOS admins, application developers, and container as a service (CAAS) developers. Some pre-requisite knowledge of Linux and Docker is required. Introductory knowledge of Kubernetes is required such as creating a cluster, creating a Pod, creating a service, and creating and scaling a replication controller. For introductory Docker and Kubernetes information, refer to Pro Docker (Apress) and Kubernetes Microservices with Docker (Apress). Some pre-requisite knowledge about using Amazon Web Services (AWS) EC2, CloudFormation, and VPC is also required.