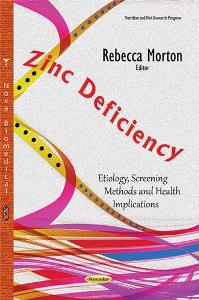 Zinc is the second most prevalent trace found in the human body after iron. It is essential for normal cell function and metabolism, playing a central role in over 300 enzymatic reactions, and protects cells from free radical damage. The central role of zinc in cell growth and differentiation explains the dramatic effect of zinc deficiency in tissues with a rapid cell turnover such as hair growth. In recent years, much interest has been generated by the possibility that subclinical zinc deficiency may significantly increase the incidence of and morbidity and mortality from diarrhea and upper respiratory tract infections. Clinical manifestations of zinc deficiency include delayed sexual maturation, impotence, hypogonadism, oligospermia, alopecia, dysgeusia, immune dysfunction, night blindness, impaired wound healing, and various skin lesions. After bariatric surgery, zinc deficiency is often associated with other micronutrients deficiencies, mainly iron.

Chapter One in this book provides a review of the etiology, health implications and management of zinc deficiency after bariatric surgery. Currently, recommendations regarding routine screening for zinc deficiency or the use of daily oral zinc supplementation in individuals after bariatric surgery are not based on clinical trials. Gaps that exist in the understanding of zinc deficiency are summarized in Chapter Two. Chapter Three brings attention to the important implications of zinc in carcinogenesis. It provides a comprehensive review of the current literature on the role of zinc in carcinogenesis, as well as highlights the significance of zinc homeostasis mechanisms, which are essential for understanding the key roles of this trace element in carcinogenesis.


About the Living Body: Introduction to Philosophical Anatomy
A Practical Guide to Forensic Nursing