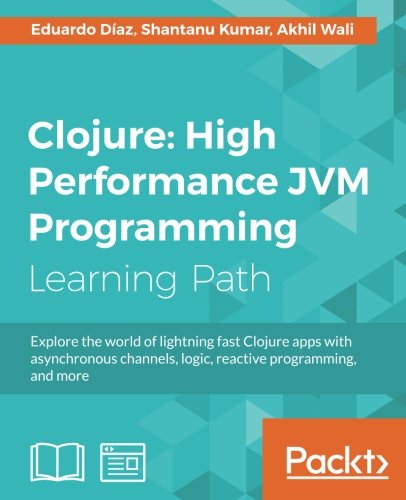 Clojure is a general-purpose language from the Lisp family with an emphasis on functional programming. It has some interesting concepts and features such as immutability, gradual typing, thread-safe concurrency primitives, and macro-based metaprogramming, which makes it a great choice to create modern, performant, and scalable applications.

This learning path aims at unleashing the true potential of the Clojure language so you can use it in your projects. It begins with installing and setting up the Clojure environment before moving on to explore the language in depth. You'll get acquainted with its various features such as functional programming, concurrency, reducers, transducers, core.async and core.logic, and so on with a great level of detail.

Moving on, you'll also learn how to enhance performance using Java interoperability and JVM-specific features from Clojure; you'll even master language features such as asynchronous channels, actors, logic programming, reactive programming, metaprogramming, and so on.

This learning path combines some of the best that Packt has to offer in one complete, curated package. It includes content from the following Packt products:

This is an easy-to-follow, step-by-step guide to start writing Clojure programs, making use of all of its varied features and advantages.


Automate it! - Recipes to upskill your business
Exploring AWS DevOps