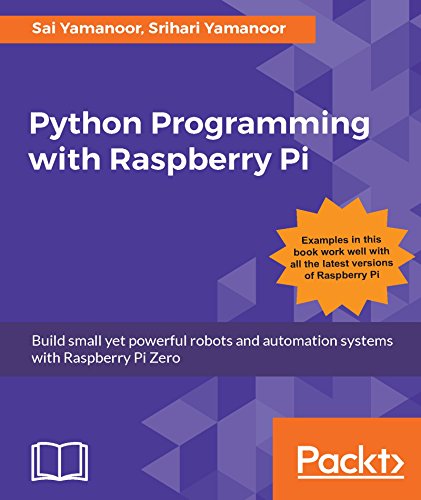 Raspberry Pi Zero is a super-small and super-affordable product from Raspberry Pi that is packed with a plethora of features and has grabbed the notice of programmers, especially those who use Python.

This step-by-step guide will get you developing practical applications in Python using a Raspberry Pi Zero. It will become a valuable resource as you learn the essential details of interfacing sensors and actuators to a Raspberry Pi, as well as acquiring and displaying data.

You will get started by writing a Python program that blinks an LED at 1-second intervals. Then you will learn to write simple logic to execute tasks based upon sensor data (for example, to control a motor) and retrieve data from the web (such as to check e-mails to provide a visual alert). Finally, you will learn to build a home automation system with Python where different appliances are controlled using the Raspberry Pi.

The examples discussed in each chapter of this book culminate in a project that help improve the quality of people’s lives.

Sai Yamanoor is an Embedded Systems Engineer working for a private start-up school in the San Francisco Bay Area where he builds classroom devices that help provide personalized education to students. He completed his graduate studies in Mechanical Engineering at Carnegie Mellon University, Pittsburgh, PA, and his undergraduate work in Mechatronics from India. His interests, deeply rooted in DIY and open software and hardware cultures, include developing gadgets and apps that improve the quality of life, Internet of Things, crowdfunding, education, and new technologies.

In his spare time, he plays with various devices and architectures such as the Raspberry Pi, Arduino Yun, and other Linux SBCs. Sai blogs about his adventures at http://mechatronicscraze.wordpress.com/. He has recently started building connected objects like this one: http://sai-y.github.io/photon_desktop_lamp/.

He is a Certified Quality Engineer and a Certified SolidWorks Expert. He has extensive experience in taking conceptual models to prototype and in design transfer to manufacturing. In his spare time, he can be seen photographing in nature, or tinkering with his garden in California.