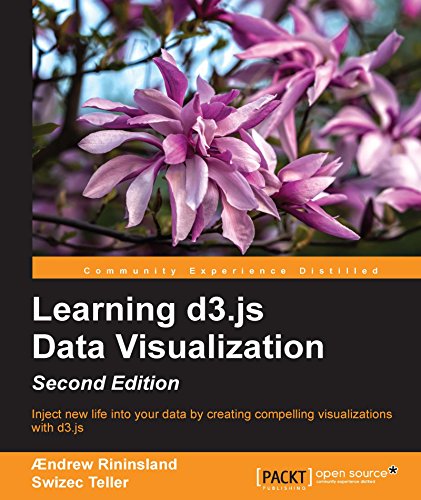 D3 has emerged as one of the leading platforms to develop beautiful, interactive visualizations over the web. We begin by setting up a strong foundation, then build on this foundation book will take you through the entire world of reimagining data using interactive, animated visualizations created in D3.js.

We also include chapters that explore a wide range of visualizations through practical use cases. By the end of this book, you will have unlocked the mystery behind successful data visualizations and will be ready to use D3 to transform any data into a more engaging and sophisticated visualization.

Ændrew Rininsland is a developer and journalist who has spent much of the last half-decade building interactive content for newspapers such as The Times, Sunday Times, The Economist, and The Guardian. During his 3 years at The Times and Sunday Times, he worked on all kinds of editorial projects, ranging from obituaries of figures such as Nelson Mandela to high-profile data-driven investigations such as The Doping Scandal, the largest leak of sporting blood test data in history.

A prolific open source developer, Ændrew has released many kinds of projects, ranging from small utility libraries such as Doctop (which allow the creation of live updating datasets using Google Docs) to big charting tools such as AxisJS. He is also a co-maintainer of C3.js, a widely used abstraction of D3 that greatly speeds up the creation of several basic chart types, and GitHub.js, a library that makes it easy to interact with the GitHub API.

Swizec Teller author of Data Visualization with d3.js, is a geek with a hat. Founding his first startup at 21, he is now looking for the next big idea as a full-stack web generalist focusing on freelancing for early-stage startup companies.

When he isn't coding, he's usually blogging, writing books, or giving talks at various non-conference events in Slovenia and nearby countries. He is still looking for a chance to speak at a big international conference.

In November 2012, he started writing Why Programmers Work At Night, and set out on a quest to improve the lives of developers everywhere.


Canvas Cookbook
T-SQL in One Hour a Day, Sams Teach Yourself