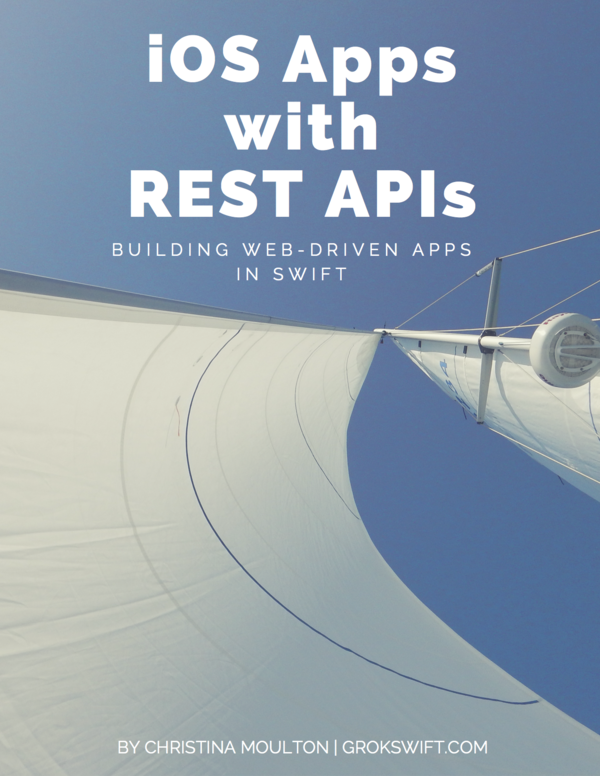 Making your first Swift app that uses a web service can be overwhelming. It seems like every time you try to figure it out you just add more things to learn to your list: REST, Alamofire, parsing JSON, OAuth, App Transport Security, setting headers, … But it doesn’t have to be confusing.

Skip the hundreds of pages that barely get into how to make a network call in iOS. No esoteric details about Core Anything or mathematical proofs of flatmap. Only the nitty gritty that you need to get real work done now: interfacing with your web services and displaying the results in your UI.

After reading this book you’ll be able to:

- Analyze a JSON response from a web service call and write Swift code to parse it into model objects.

- Display those model objects in a table view so that when the user launches the app they have a nice list to scroll through.

- Add authentication to use web service calls that require OAuth 2.0, a username/password, or a token.

- Transition from the main table view to a detail view for each object, possibly making another web service call to get more info about the object.

- Let users of your app add, modify and delete objects (as long as your web service supports it).

- Hook in to more web service calls to extend you app, like adding user profiles or letting users submit comments or attach photos to objects.

This book is for:

- Software developers getting started with iOS but experienced in other languages

This book isn't for:

- People completely new to programming, you should have a decent grasp of at least one object-oriented programming language or have completed several intro to iOS tutorials

- Designers, managers, UX pros, ... It's a programming book. All the monospace font inserts will probably drive you crazy.

- Cross-platform developers dedicated to their tools (including HTML5 & Xamarin), this is all Swift & native UI, all the time