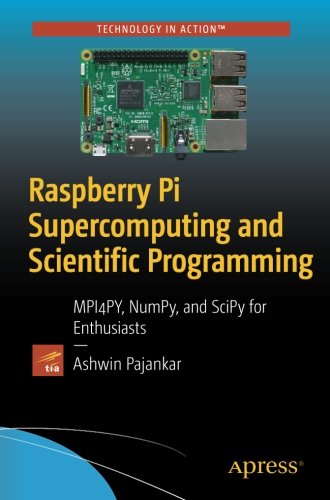 Once the cluster is built, its power has to be exploited by means of programs to run on it. So, Raspberry Pi Supercomputing and Scientific Programming teaches you to code the cluster with the MPI4PY library of Python 3. Along the way, you will learn the concepts of the Message Passing Interface (MPI) standards and will explore the fundamentals of parallel programming on your inexpensive cluster. This will make this book a great starting point for supercomputing enthusiasts who want to get started with parallel programming.

The book finishes with details of symbolic mathematics and scientific and numerical programming in Python, using SymPi, SciPy, NumPy, and Matplotlib. You’ll see how to process signals and images, carry out calculations using linear algebra, and visualize your results, all using Python code. With the power of a Raspberry Pi supercomputer at your fingertips, data-intensive scientific programming becomes a reality at home.