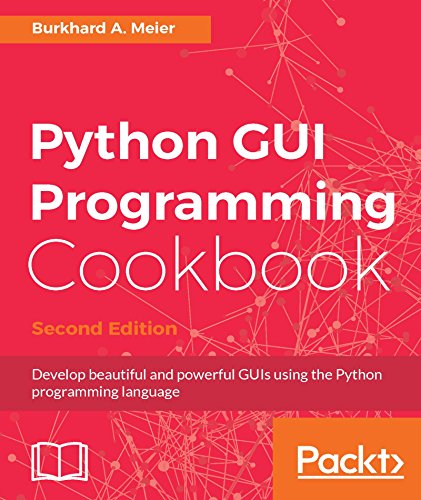 This book will guide you through the very basics of creating a fully functional GUI in Python with only a few lines of code. Each and every recipe adds more widgets to the GUIs we are creating. While the cookbook recipes all stand on their own, there is a common theme running through all of them. As our GUIs keep expanding, using more and more widgets, we start to talk to networks, databases, and graphical libraries that greatly enhance our GUI's functionality. This book is what you need to expand your knowledge on the subject of GUIs, and make sure you're not missing out in the long run.

While experienced in Visual Studio .NET C#, Visual Test, TestComplete, and other testing languages (such as C/C++), the main focus of the author over the past five years has been developing test automation written in Python 3 to test the leading edge of FLIR ONE (now in its third generation) infrared cameras for iPhone and Android smart phones and handheld tablets, as well as assuring the quality of FLIR bolometer IR camera platforms.

Being highly appreciative of art, beauty, and programming, the author developed GUIs in C# and Python to streamline everyday test automation tasks, enabling these automated tests to run unattended for weeks, collecting very useful data to be analyzed and automatically plotted into graphs and e-mailed to upper management upon completion of nightly automated test runs.

His previous jobs include working as a senior test automation engineer and designer for InfoGenesis (now Agilysys), QAD, InTouch Health, and FLIR Systems.