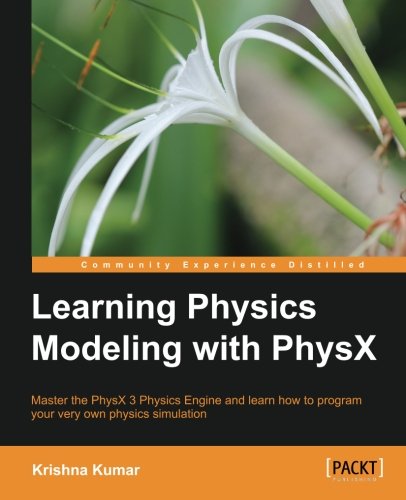 As a game developer, you'll know the power of PhysX to add simulation-level realism to games, and this book shows you exactly how best to achieve it with a hands-on, examples-led approach. Sophisticated stuff.

In this day and age, physics engines play a very critical role in the success of a sophisticated game. PhysX is a state-of-the-art cross-platform physics engine widely used by top game studios and developers. It contains all the physics-related components you will need and exploits the parallel-processing capability of modern GPUs as well as multi-core CPUs to make a game as physically-realistic as possible. This book will help you to program and simulate games by using PhysX 3.

Learning Physics Modeling with PhysX helps you to master physics simulation using the PhysX Physics Engine from scratch. This is useful not only for game developers, but also for developers making virtual walkthroughs or training and other simulation applications. It will cover all the essential features of PhysX 3 with easy-to-understand code snippets and examples to help you learn quickly and efficiently.

This book will start off by introducing you to the basic concepts of physic engines and will give you a glimpse of PhysX implementation. We then gradually cover more sophisticated topics with sample source code so that you can see what you have learned in action. We will cover the history and features of the PhysX SDK as well as how to configure it with the C++ compiler. After touching upon essential topics like rigid body dynamics and collision detection, we will gradually move on to more advanced topics like joints, scene queries, character controllers, particles, and cloth simulation. By the end of this book, you will have learned everything you need to know about the PhysX 3 Physics Engine, and you will be able to use it to program your very own physics simulation quickly and efficiently.

What you will learn from this book

Written as a practical, step-by-step tutorial, this book is full of engaging examples to help you learn in a practical context.

Who this book is written for

This book is for game developers or anyone who wants to learn how to fully utilize the PhysX Physics Engine quickly and efficiently. You don't have to be a die-hard programmer to get started with this book. Basic knowledge of C++, 3D mathematics, and OpenGL is all you need.