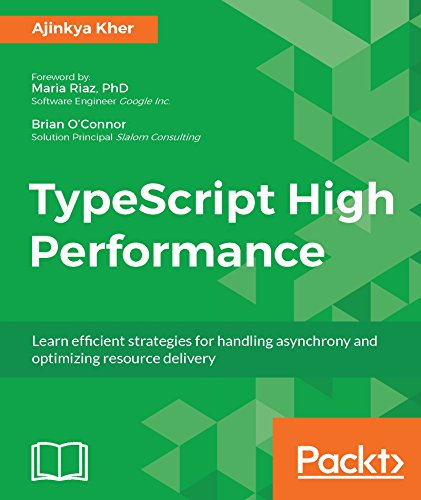 In a world where a tiny decrease in frames per second impacts customer engagement greatly, writing highly scalable code is more of a necessity than a luxury. Using TypeScript you get type checking during development. This gives you the power to write optimized code quickly. This book is also a solid tool to those who're curious to understand the impact of performance in production, and it is of the greatest aid to the proactive developers who like to be cognizant of and avoid the classic pitfalls while coding.

The book will starts with explaining the efficient implementation of basic data Structures, data types, and flow control. You will then learn efficient use of advanced language constructs and asynchronous programming. Further, you'll learn different configurations available with TSLint to improve code quality and performance. Next, we'll introduce you to the concepts of profiling and then we deep dive into profiling JS with several tools such as firebug, chrome, fiddler. Finally, you'll learn techniques to build and deploy real world large scale TypeScript applications.

Ajinkya Kher is a full stack developer, currently working at Microsoft on the communications infrastructure for Skype and Microsoft teams. He is passionate about modern scalable architectural patterns, efficient problem solving, and process design. His experience and expertise is in the .NET middle tier/backend and modern HTML5 frontend frameworks.

He loves getting his hands dirty with the latest and the greatest technologies out there. In his free time, you can find him winning Hackathons, building mobile applications, and lifting weights. He has been playing tennis for more than a decade and has been an ardent fan of cricket and Sachin Tendulkar since childhood, his weekends are thus often spent playing these two sports. He also likes to practice and read about spirituality and philosophy whenever he can.

Check out his latest podcast Building Modern Web Applications using React/Redux/Angular2/RxJs on YouTube and you can also follow him on LinkedIn.