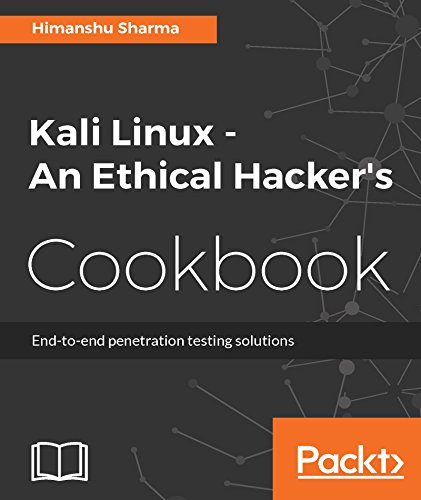 With the current rate of hacking, it is very important to pentest your environment in order to ensure advanced-level security. This book is packed with practical recipes that will quickly get you started with Kali Linux (version 2016.2) according to your needs, and move on to core functionalities. This book will start with the installation and configuration of Kali Linux so that you can perform your tests. You will learn how to plan attack strategies and perform web application exploitation using tools such as Burp, and Jexboss. You will also learn how to perform network exploitation using Metasploit, Sparta, and Wireshark. Next, you will perform wireless and password attacks using tools such as Patator, John the Ripper, and airoscript-ng. Lastly, you will learn how to create an optimum quality pentest report! By the end of this book, you will know how to conduct advanced penetration testing thanks to the book's crisp and task-oriented recipes.

Himanshu Sharma, 23, has already achieved fame for finding security loopholes and vulnerabilities in Apple, Google, Microsoft, Facebook, Adobe, Uber, AT&T, Avira, and many more with hall of fame listings as proofs. He has gained worldwide recognition through his hacking skills and contribution to the hacking community. He has helped celebrities such as Harbhajan Singh in recovering their hacked accounts, and also assisted an international singer in tracking down his hacked account and recovering it. He was a speaker at the international conference Botconf '13, held in Nantes, France. He also spoke at IEEE Conference in California and Malaysia as well as for TedX. Currently, he is the cofounder of BugsBounty, a crowd-sourced security platform for ethical hackers and companies interested in cyber services.