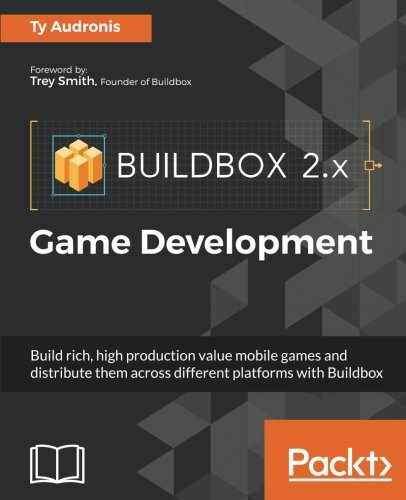 Buildbox is an any skill level development platform to develop video games with no coding experience. It also exports these games to be compiled for any platform (from Windows to Mac to iOS to Android and Blackberry) all using the same graphic user interface.

Using an example as a tutorial, we will relate the driving principles and you ll see how you can implement these principles to develop any games on the platform. We begin by setting expectations and providing a brief overview of the software. But it s not long before you dive in to creating your first video game. You will actually have a playable level ( world ) by the end of the second chapter.

Later on, you ll learn everything from basic graphics creation to advanced world design while you refine your first game, called Ramblin Rover. All along the way, you will see how certain functions could be used in tandem to create other types of games; hoping to spark imagination. We will follow the principles and process of monetization through ads and in-game rewards.

Lastly, we will go through the process of exporting, compiling, and preparing your storefront to sell the games you will eventually create.

Ty Audronis has been creating games and interactive experiences on computers since 1980. When other children were earning money for trips to convenience stores and arcades by raking leaves or mowing lawns, Ty was helping neighbors buy computers, and programming games for the neighborhood kids on an Atari 800 computer.

In the 1990s, Ty was introduced to the Internet and was attending California State University, Chico, as a visual effects major. He had an epiphany; one day there will be no difference between film, television, games, and the Internet. Everything will converge. As a result, Ty diversified his education (and career) into all things media. Luckily for Ty, he was right.

He s worked on several apps and games for various clients using several different development platforms. Ty has worked in many great institutions (from Frog Design to California Academy of Sciences and beyond). Ty has been recognized in several industries for his artistic and technical exploits and abilities. These include studio design, workflow design, post-production for TV/film, marketing, digital design and development, and even as a drone pilot and builder.