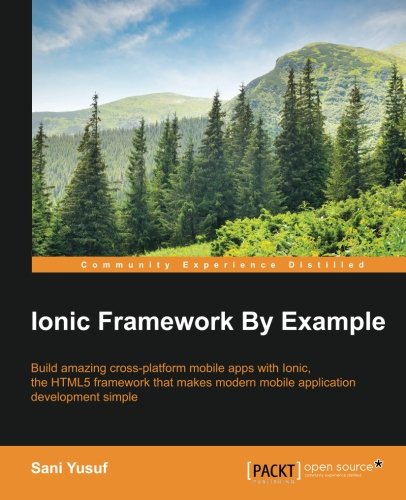 Change doesn't have to be challenging. Sometimes it can be simple – sometimes it just makes sense. With Ionic, mobile development has never been so simple, so elegant and obvious. By helping developers to harness AngularJS and HTML5 for mobile development, it's the perfect framework for anyone obsessed with performance, and anyone that understands just how important a great user experience really is.

This book shows you how to get started with Ionic framework immediately. But it doesn't just give you instructions and then expect you to follow them. Instead it demonstrates what Ionic is capable of through three practical projects you can follow and build yourself.

From a basic to-do list app, a London tourist app, to a complete social media app, all three projects have been designed to help you learn Ionic at its very best. From setting up your project to developing on both the server side and front end, and best practices for testing and debugging your projects, you'll quickly become a better mobile developer, delivering high performance mobile apps that look awesome.

Sani Yusuf is the founder of Haibrid, a company focused on creating innovative mobile solutions with hybrid technologies operating from London, England. Starting his career as a web developer, he moved on to native development of both desktop and mobile applications before developing a focus on hybrid mobile apps due to their philosophy of reusability and cross-platform operability.

When not managing his company, Sani spends his time public speaking, writing, and endlessly researching new educational and healthcare mobile solutions. Although a Nigerian by birth, Sani moved to the UK in 2010 to pursue a degree in computer science, having a great interest in healthcare and educational advancement with mobile technology.

A lover of the movie "Avatar" and a speaker of four languages, namely French, English, Arabic, and Hausa, Sani spends his free time travelling, watching movies, and watching Arsenal football club being great.

During his career, Sani has worked with companies like Anritsu, Microsoft, Huddlebuy, Envato, and more recently, Nexercise, with some of his works awarded by Microsoft, Samsung, and Aimia Ltd.