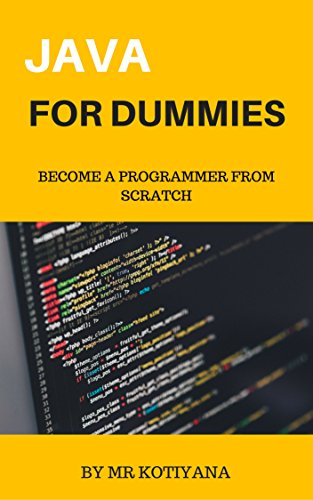 
This New Java For Dummies Book by Best-Selling Author Mr Kotiyana gets you started programming in Java right away & begins with the java basics, such as how to create, compile, and run a Java program. He then moves on to the keywords, syntax, and constructs that form the core of the Java language.

You will be able to start from scratch without having any previous exposure to Java programming. By the end of this book, you will have the skills to be a capable programmer, or at least know what is involved with how to read and write java code. Afterward you should be armed with the knowledge required to feel confident in learning more. You should have general computer skills before you get started. After this you'll know what it takes to at least look at java program without your head spinning.
Java is a popular general purpose programming language and computing platform. It is fast, reliable, and secure. According to Oracle, the company that owns Java, Java runs on 3 billion devices worldwide.

Click the BUY button now and download the book now to start learning Java. Learn it fast and learn it well.


Artificial Intelligence: VOLUME I
Install SSL on WordPress for FREE: In Just 10 Minutes!