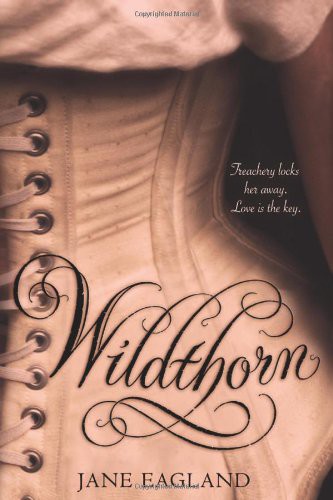 They strip her naked, of everything—undo her whalebone corset, hook by hook. Locked away in Wildthorn Hall—a madhouse—they take her identity. She is now called Lucy Childs. She has no one; she has nothing. But, she is still seventeen—still Louisa Cosgrove, isn’t she? Who has done this unthinkable deed? Louisa must free herself, in more ways than one, and muster up the courage to be her true self, all the while solving her own twisted mystery and falling into an unconventional love . . .

Originally published in the UK, this well-paced, provocative romance pushes on boundaries—both literal and figurative—and, do beware: it will bind you, too. From School Library Journal Gr 9 Up–When 17-year-old Louisa Cosgrove arrives at England’s Wildthorn Hall, her world suddenly turns upside down. She is told that she’s sick and that her name is Lucy Childs. When she protests, she is told, “Thinking you are someone else and thinking you are not ill are signs of how sick you are. You are lucky that you are here where we have the skill to cure you.” With these words, her nightmare begins. Louisa tells her story herself, therefore pulling readers into her harrowing experience in the asylum. Eagland skillfully fills in backstory by having Louisa narrate the events that led up to her confinement. She recalls her early childhood and how her father encouraged her study of medicine, while her mother entreated her to conform to 19th-century expectations for her gender. These memories alternate with her current experiences and cruel treatment in the hospital. In fact, the author manages to plant a seed of doubt as to whether Louisa is really who she says and believes she is. Eagland does a beautiful job of depicting the “real” Louisa in the end, with an unusual twist on the conventional romantic denouement. Teens will identify with her frustration at not being believed, be horrified by how she is mistreated, feel relief about her daring escape, and learn a great deal about life in a 19th-century “mad house.” Modern readers may find it difficult to accept the reason for her being locked up, but most teens will stick with Louisa’s story until the end.–Wendy Scalfaro, G. Ray Bodley High School, Fulton, NYa(c) Copyright 2010. Library Journals LLC, a wholly owned subsidiary of Media Source, Inc. No redistribution permitted. From Booklist A caution for readers eager to enjoy the traditional trappings of a gothic historical romance: this novel, like its protagonist, doesn’t always conform. Seventeen-year-old Louisa Cosgrove wants to be a doctor, but she is constantly blocked by societal and familial opposition. Only her father, who educates her himself, much to her mother’s concern and brother’s jealousy, wants Louisa to succeed. Shortly after his death, she is tricked into going to Wildthorn Hall, an insane asylum. Now addressed as Lucy Childs, stripped of her clothes and, ultimately, her identity, Louisa must plan her escape and uncover the betrayal that landed her in Wildthorn. While paying proper homage to women of the past wrongly locked away for an “over interest in learning,” Eagland casts just the right amount of doubt about Louisa’s sanity, with the conflicted heroine thrown into further confusion as she slowly falls for the kindnesses of a chambermaid named Eliza. Though predictable on occasion, Eagland’s debut stands out for its well-crafted treatment of an unconventional love affair. Grades 9-12. --Courtney Jones