libribook /
Wingnuts: How the Lunatic Fringe Is Hijacking America
/ 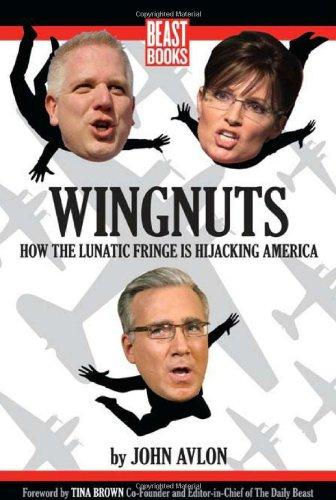 EDITORIAL REVIEW: **What?s a Wingnut?** It?s someone on the far-right wing or far-left wing of the political spectrum - the professional partisans and the unhinged activists, the hardcore haters and the paranoid conspiracy theorists. They?re the people who always try to divide us instead of unite us. *Wingnuts* looks at the outbreak of extremism in the opening years of the Obama administration ? from the unprecedented government spending that spurred the Tea-Party protests to the onset of Obama Derangement Syndrome. John Avlon explains how hate-fueled rumors take hold (one section is called ?How Obama Became Hitler, a Communist and the Antichrist?), looks at the ?hunt for heretics? that is taking place inside both parties and details the rise of hyper-partisan media. Avlon profiles preachers who are praying for the president?s death, goes inside the growing ?Hatriot? movement and parallels the ?Birthers? and the ?9/11 Truthers.? The book compares current merchants of political paranoia with past fear-mongers and finds that divisive demagogues have sold this snake oil before. But the two parties? increased polarization and the echo-chamber of the internet are helping the fringe blur with the base, making the Wingnuts more powerful than ever before. **We are allowing paranoids, hysterics and hyper-partisans to hijack our politics ? but it doesn?t have to be this way.** Avlon asserts that centrists need to stand up to the extremes on both sides and declare their independence. The book ends on a hopeful note ? the conclusion is ?How to Take America Back from the Lunatic Fringe.?